Health coverage is foundational to good health and in Kentucky, no single insurer is as foundational as Medicaid. In a very real way, Medicaid is for all of us; From childhood, through our working years, to senior care, Medicaid covers all Kentuckians in all stages of life.

For that reason, we have a lot to celebrate now that a proposed battery of barriers to Medicaid coverage has finally been rejected thanks to Governor Beshear. These barriers would have led to at least 100,000 Kentuckians losing their health coverage and finding themselves one accident or bout of sickness away from financial ruin or a health catastrophe.

If coverage is foundational to good health, then good health is foundational to being able to work. When Kentucky chose to expand Medicaid eligibility to everyone below 138% of the poverty line (around $17,235 for an individual), nearly half a million Kentuckians signed up for coverage – many of them for the first time.

Many of these newly-insured Kentuckians work, but in jobs that don’t offer coverage and don’t pay enough to make ends meet – let alone buy insurance. Census data shows that compared to the year before expansion, far fewer Kentuckians go without insurance in industries like restaurants, construction and general stores – which, together employed 77,000 Medicaid-eligible adults in 2018. 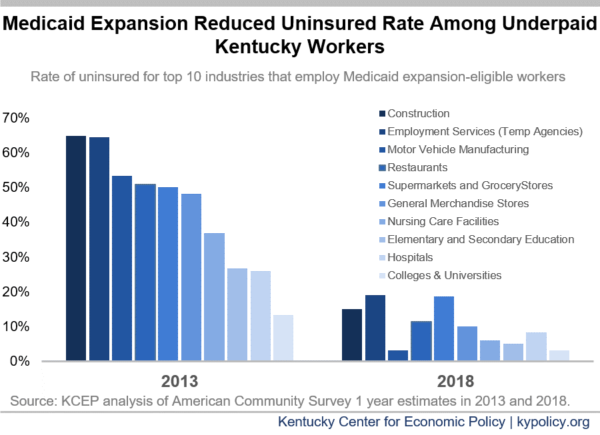 This boost in coverage came thanks to billions in federal dollars that paid for all of Medicaid expansion initially, and starting this year will pay for 90 cents on the dollar moving forward. This represents one of the largest investments in Kentucky’s history. It is making a huge difference economically – from rescuing rural hospitals on the brink of closure, to creating thousands of good jobs in the health care sector, to stimulating local economies.

Medicaid has also helped many Kentuckians get and stay healthy. Research has been piling up for years showing how the Medicaid expansion has reduced preventable hospitalizations, inappropriate ER use, and deaths from breast cancer, colon cancer and among infants. At the same time, it has increased primary care usage, routine care for chronic conditions, drug treatment and even self-reported excellent health. All of these improvements have helped Kentuckians stay employed and have a better quality of life.

Of course, ending specific barriers to this job-boosting, economy-growing, life-saving coverage isn’t the end of our work. Just recently, national research has shown that the number of uninsured children under 6 years old in Kentucky has risen by 50% since 2016 – a problem Governor Beshear has promised to address. Furthermore, thousands of Kentuckians lose Medicaid coverage every month because of excessive paperwork requirements. The private companies we entrust to provide Medicaid coverage can improve the quality of care their enrollees receive. And outside of Medicaid there are many ways we can make coverage more affordable for those on private insurance – particularly by reducing the cost of prescription drugs, ending the practice of surprise billing and helping provide better subsidies for those who don’t get insurance through their jobs.

Kentuckians look out for each other when we hit a hard patch; We all need a hand sometimes. White, Black or Brown, urban or rural, abled or disabled, unemployed or underpaid – every one of us needs health care, and every one of us can count on Medicaid when we need it most. In restoring Kentucky to a full Medicaid expansion without the threat of expensive and harmful barriers, we have upheld the inherent dignity of every Kentuckian, and set the foundation we can build on to truly thrive as a commonwealth.