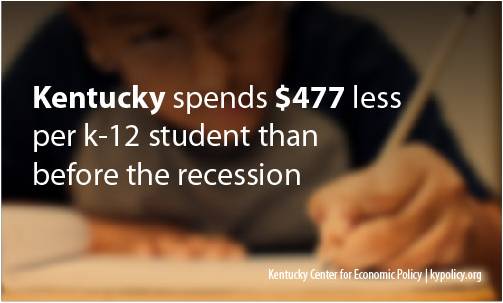 Kentucky ranks fourteenth worst in the country in the depth of cuts to school funding since the start of the recession, and is one of fifteen states that have continued to cut K-12 funding in the current year, according to a new report released today by the Center on Budget and Policy Priorities. These damaging cuts slow the recovery and will make Kentucky less prosperous in the future.

The report shows that Kentucky has cut its per-pupil core funding for K-12 schools by 9.9 percent since 2008 after adjusting for inflation, a deeper cut than 34 other states.

Ensuring that Kentucky has good schools and an educated workforce is a critical investment in the state’s economic growth. By cutting state funding for education, we undermine our ability to educate Kentucky’s children and threaten our future.

State revenue declined sharply during the recession. But instead of addressing budget shortfalls by taking a balanced approach that includes new revenues through much-needed state tax reform, Kentucky relied very heavily on cuts to state services, including education.

The report only looks at dollars allocated for states’ main formula to fund local schools, which in Kentucky is known as the SEEK program. Other state funding for Kentucky schools not included in SEEK—including monies for professional development, textbooks and afterschool programs—has been cut even more drastically.

Kentucky’s K-12 education cuts hurt the state’s economy in the short-term and also have long-term economic consequences. A strong education system is essential to creating and maintaining a thriving economy. Businesses need a well-educated workforce, and education cuts undermine the state’s ability to produce workers with the skills needed for a modern economy.

“At a time when the nation is trying to produce workers with the skills to master new technologies and adapt to the complexities of a global economy, states should be investing more — not less — to ensure our kids get a strong education,” said Michael Leachman, director of state fiscal research at the Center on Budget and Policy Priorities and co-author of the report released today.

The Center’s full report can be found at: http://www.cbpp.org/cms/index.cfm?fa=view&id=4011.