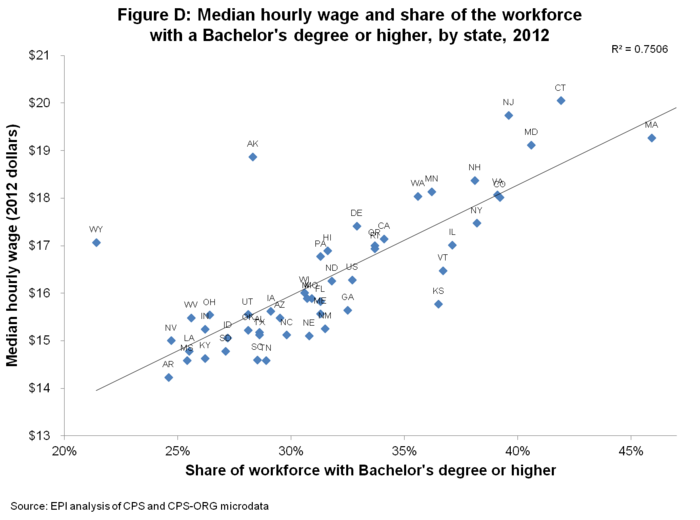 The best way for Kentucky to grow its economy is by investing in a well-educated workforce, according to a new paper from the Economic Analysis and Research Network (EARN), a project of the Economic Policy Institute.

In A Well Educated Workforce is Key to State Prosperity, Noah Berger, president of the Massachusetts Budget and Policy Center, and Peter Fisher, research director at the Iowa Policy Project, find a strong link between the educational attainment of state workforces and both productivity and median wages. Expanding access to high quality education will create more economic opportunity for Kentuckians and do more to strengthen Kentucky’s overall economy than anything else.

Overwhelmingly, high-wage states are states that have a well-educated workforce, while states with less-educated workforces see lower wages. In 2012, just 26.2 percent of Kentucky’s workforce had attained at least a bachelor’s degree, lower than 42 other states. That same year, Kentucky’s median wage of $14.63/hour was lower than 44 other states. In the three states where more than 40 percent of the population has a bachelor’s or more education, median wages are $19 to $20 an hour, nearly a third higher.

According to the paper, ways to increase the educational attainment of Kentucky’s population include: working to slow the growth of college tuition, increasing financial aid, investing in quality K-12 education and offering universal preschool programs.

Meanwhile, strategies such as cutting taxes to lure employers and capture private investments from other states are shortsighted, and promote a race to the bottom which undermines states’ ability to invest in and attract an educated workforce. The paper finds no clear relationship between a state’s tax rates and its wages.

The full report is available at http://www.epi.org/publication/states-education-productivity-growth-foundations/.