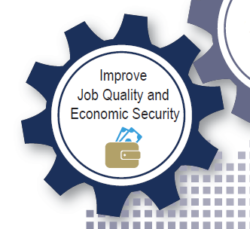 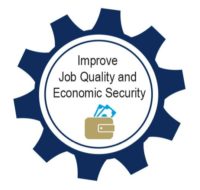 Improving job quality and economic security is one of the five key strategies in “An Economic Agenda for a Thriving Commonwealth.” Kentucky can make real progress in these areas by updating existing and enacting new commonsense job quality standards. The successful experience of states that raise standards shows businesses benefit through increased productivity, reduced turnover and stronger consumer spending. Our whole commonwealth will benefit when paychecks better reflect the contributions Kentuckians make through work every day, and when work supports rather than detracts from leading healthy, fulfilling lives.

On the other hand, when work doesn’t work for Kentuckians, our economy suffers as well. Kentucky wages are low and have been largely stagnant for too long. Nearly 30 percent of Kentuckians make wages that would put them below the poverty line for a family of four. In addition, low- and middle-income workers have seen little to no real wage growth for the last couple of decades. These challenges disproportionately impact women, people of color and economically distressed regions of our state. The following policy ideas will improve the economy for all of us.

Give Kentuckians a Pay Raise with a Higher Minimum Wage

Because lawmakers have allowed the value of the minimum wage to erode for decades — even as worker productivity has grown — today a full-time job paying minimum wage is not enough to keep one worker and their dependent out of poverty. Raising the state’s minimum wage to $15 an hour by 2025 would give a much-needed and well-deserved boost in income to 638,000, or 1 in 3, Kentucky workers. This population includes those currently making less than $15 per hour and some just above that amount who would also see a wage bump. The state should also index the minimum wage to inflation to preserve its value over time and eventually eliminate the wage penalty for tipped workers — who face higher rates of poverty — by allowing them the same minimum wage other workers earn.

“Right to work” (RTW) laws harm workers’ ability to collectively bargain for better job quality, lowering the bar for union and non-union employers and reducing workers’ wages across our economy — all without spurring job or economic growth. Kentucky should repeal RTW and also reinstate prevailing wage requirements on public works projects, ensuring a skilled and fairly-compensated workforce is building our schools and other public infrastructure.

The federal Earned Income Tax Credit (EITC) reduces poverty and enhances opportunity for low- to moderate-income families through a tax credit that supplements low wages. By enacting a refundable EITC at 15 percent of the federal credit, Kentucky could join 29 other states and D.C. that build on the successes of the federal credit — which evidence shows has lasting benefits for kids including improved long-term health, educational and employment outcomes.

Nearly half of private sector employees ages 25 to 64 in Kentucky work for a company that does not offer a retirement plan, and low-income workers are the least likely to have access to such plans. To address this issue, Kentucky should follow a model now being implemented in other states by creating a state-sponsored retirement option that automatically enrolls employees in most private firms without employer-sponsored plans, allowing employees who do not wish to participate to opt out. These plans have low fees and portable benefits, are easy to administer for employers, provide a more even playing field for small businesses to recruit and retain workers, and are self-sustaining after an initial start-up investment from the state. The resulting boost in economic security for Kentucky seniors means lower poverty and more retirement income circulating in our economy.

Illnesses, major life events such as childbirth and the demands of caring for children and aging parents affect how much we can work and when. These challenges are especially present for women and for low-wage workers whose employers are less likely to provide paid leave and more likely to demand grueling schedules. To keep workers in their jobs and improve health and economic security, the state should enact paid sick leave so workers can accrue paid leave over time and provide family/parental leave at a share of one’s normal wages. Further, to help workers plan for child care and other family needs the state should require employers to give workers adequate two-week notice of their work schedules, the ability to decline hours that are requested outside the fair notice period and protection from retaliation for requesting changes to work schedules.

Women in Kentucky typically make 83 cents for every dollar men make, while black workers make 83 cents and Hispanic workers 65 cents for every dollar white workers make. To help close these gaps, Kentucky should strengthen its existing pay discrimination prohibition so all Kentuckians are paid fairly for doing work of comparable worth, even if not in the same jobs as their colleagues, and especially in jobs dominated by workers of a particular sex, race or national origin. To prevent former discrimination from influencing pay in new jobs, and to put employers and employees on more equal footing as pay is negotiated, the state should prohibit employers and employment agencies from asking questions about applicants’ pay history and require employers to provide more information about employee pay.

Only 19 percent of Kentucky workers between jobs receive unemployment insurance (UI) payments that are designed to help smooth the transition, harming jobless workers and communities that experience loss of industry. The state can help more Kentuckians access UI by simplifying income eligibility standards, extending assistance to part-time workers and those who quit for reasons such as domestic violence and offering benefits to long-term unemployed workers who need access to training to improve skills. Another, related policy that would especially help in weak economies is providing UI subsidies to workers who lose work hours in firms that, instead of laying people off, cut hours for a larger group of people. These “work-sharing” programs, which more than half of states have, keep people employed and help employers retain experienced workers.

Employees misclassified as independent contractors (ICs) in Kentucky lack protection under our state’s minimum wage, overtime, anti-discrimination and other wage and hour laws without the freedom and control that legitimate ICs enjoy over their work. The state also loses much-needed employer payments into our workers’ compensation and unemployment insurance (UI) systems. Kentucky’s current classification tests, which are unpredictable and easy to abuse, should be replaced with a three-prong “ABC” test — currently used in 27 states to determine UI liability and in a handful of states to determine worker protections under wage and hour laws. This test makes it harder to classify workers as ICs by requiring employers to prove an IC’s work is outside the regular course of the employer’s business and that the worker is free from control and direction in how they perform the work.

State and federal workforce development funds and economic development incentives should be reserved for “high-road” businesses that provide family-friendly employment, have low rates of employee turnover, do not participate in wage theft or have other wage and hour violations, and offer wages and benefits in the top 20 percent for their industry. The state should also implement a “good jobs certification” for Kentucky employers who employ these high-road jobs practices, establishing a minimum qualification for businesses to receive public dollars and making it easy for both the public and private sectors to identify and engage employers that provide good jobs.